Deprecated: Function create_function() is deprecated in G:\PleskVhosts\jennymeyerhoff.com\httpdocs\wp-content\themes\dynamik-gen\lib\functions\dynamik-navbars.php on line 619
 Cute and furry and infuriating

Something I know about my writing (which you may not have known but will now because I am posting it on the internet) is that events that are going on in my life at any given time will sometimes wind up in the book that I am writing at that moment.

For example, in THIRD GRADE BABY the main character’s younger brother is teething. As I was writing that book I had a baby who was teething! Coincidence? I think not.

One thing that’s begging to be put into a book, but alas hasn’t yet, is how to live in a house with animals. Hmmm…you say. Many, many people live in houses with animals. They are called pets, and most people find this a very rewarding experience.

Those are not the kind of animals I am talking about.

I believe I have mentioned before that I live in a forest. In fact my town is a Tree City USA, and no one is allowed to cut down trees on their property without permission from the village. So, naturally my yard is habitat to many creatures. Which is cool.

In my yard I’ve seen deer, 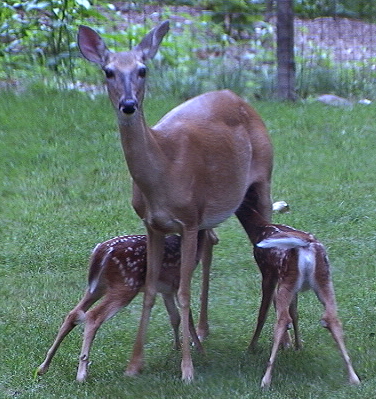 (That was kind of scary because they were right outside my door, and I was trapped in my house. Although, I have to admit, they guys I saw were a little mangier than that one.)

As long as the critters stay outside, I’m pretty much cool with them. But some little guys aren’t content with the whole inside/outside habitat sharing arrangement. No. They are greedy, and come fall, want in on my central heating action.

We’ve had mice, a bird and some unknown something in the attic. Recently a chimpmunk came to visit not once, but three times. This was not fun for me, but as a result of this misfortune, I can now pass on to you some very important knowledge. A surefire way of ridding your house of a chipmunk should one ever come calling.

First find your self a bag of mini-cheese crackers. (They must be mini, as chipmunk-sized.)
Next, find last known location of chipmunk sighting and create a cracker trail from said location to the back door of house and out the door about a foot or two.
Then, hide in a location not too far from the door where you can see the chipmunk but it can’t see you.
Finally, when the chipmunk munches its way out of your house, slam the door on its cute (only when it’s outside) little tail and try to pretend your heart isn’t pounding because you thought you were going to be mauled by a three pound rodent.

Maybe I should write a book about exterminators?