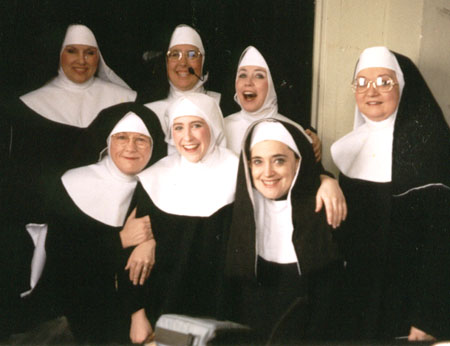 Gosh, time flies. I didn’t realize I’d been ignoring my blog for so long. But I’ve been busy with other worthwhile endeavors. (For example getting a pedicure, watching America’s Next Top Model and going to a writing retreat. Uh…those are in random order.)
The writing retreat was fantastic. I’d never been on one before, but I’d definitely go again. It’s bliss to be able to write without any competing responsibilities. So, the retreat was in a convent. Not being of the nunnish persuation, that was a little weird. (Did you know that they can’t actually fly?) But the rest of it was fantastic. I got a lot of work done on the manuscript I am working on right now. It’s top secret, so I can’t tell you that it’s about a fourth grade boy who wants to be a stand-up comedian. And I got to hang out with lots of other writers! Unfortunately I was on a silent floor, so I couldn’t actually talk to them, but they looked like really nice people.
Now that I’m back, I seem to be blogging instead of writing. So I’ll just say ta ta for now and get back to the important stuff that I need to do like shopping for new brown sandals. (It’s so hard to find the perfect pair.)
Notice: compact(): Undefined variable: limits in G:\PleskVhosts\jennymeyerhoff.com\httpdocs\wp-includes\class-wp-comment-query.php on line 860